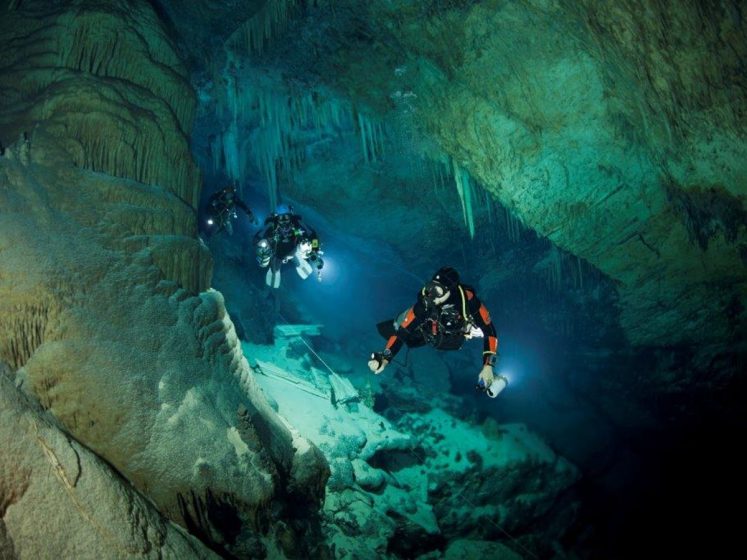 Having been cave trained in Mexico where, let’s face it, there’s a great deal more detail to see in the underwater caves, I was greatly concerned about what there would be to see in their Floridian counterparts. There would be no amazing formations hanging from the ceiling, no corresponding spires from the floor either.

Fortunately I was pleasantly surprised when I saw Peacock. The walls were not as smooth as Ginnie or Little River, and there were actually a couple of really interesting formations: one a horizontal hole and the other a near-vertical column. Ok, so there are likely many more interesting things than those in this very system but hey I was new, and didn’t make it all that far. 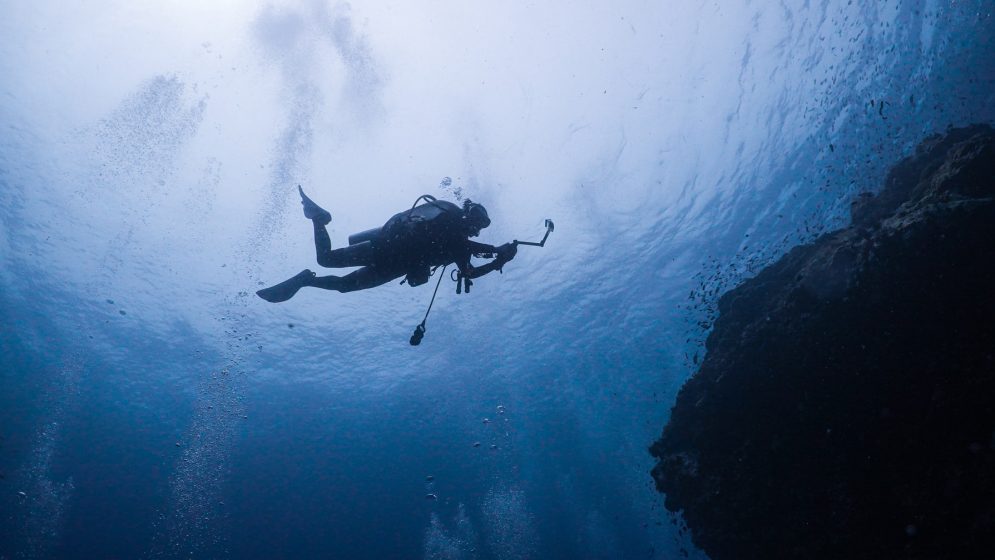 Ever look back at old family albums and laugh your posterior off at how bad the shots were, how old the hairstyles look, and utter repeatedly “What the hell was I thinkin?” Welcome to mine. These shots date back to 1998; my first underwater camera, my first trip to “the tropics”, and my first escape from a rather brutal Canadian winter.

The resort was called South Caicos Ocean Haven, a decidedly small resort that likely wasn’t any bigger when it went by the name Club Caribe: 22 rooms, nearly as many air conditioners, no TV’s and no phones. Favourable adjectives that come to mind are: basic, rustic, simple, tasteful, off-the-beaten-path, diver-centric, unencumbered, comfortable, clean, and… did I mention basic? The less flattering ones would be: spartan,  lacking, undeveloped, and provisionless (if that’s a word). When I was there the new owner had taken over the place less than a year before and was still in the rebuilding phase – I’m sure it’s better now, if it’s still in business (it appears their website is no longer functioning).

The selection of dive sites available at the time was somewhat limited since they had not yet fully explored the area’s potential, but the sites we visited were excellent. Fish are plentiful since it is in a national park area which prohibits commercial fishing. Sharks, eagle rays, stingrays, crabs, trumpet fish, barracuda and  eels were common sightings at each of the sites which were a maximum of 15 minutes from the resort.

As a wreck aficionado the highlight was likely the plane, reportedly a DC-10 but seeming much smaller than that, complete with requisite swash buckling tale of it being a drug runner. The Arches was another favourite – a small coral arch that seemed to attract a rather abundant amount of marine life. Due to the out-of-the-way nature of the locale, it being the only resort on the island, and diving being just about the only thing to do on South Caicos, this is a destination clearly intended for divers only. The island is small, the population is small, the number of divers it sees is small, and the number of activities is small, but that all adds up to one valuable asset: the place has not been “dived out”. The diver impact I could see was nil, the fish weren’t harassed regularly so weren’t as afraid of you as is common at more frequented destination, and having such short boat rides (particularly given the way flat hulled little Carolina skiffs like these abhor waves of ANY size) is a true blessing.

What do you get when you take a working boat from the Great Lakes, refit it, and turn it into a liveaboard vessel in the tropics? You get the cheapest date in the Aggressor fleet.

Roatan, the area where most of the diving was done, is touted as the “macro capital of the world”. Not sure who started calling it that, but they likely weren’t too far off. Colourful little critters are plentiful so photographers and eagle-eyed fish lovers rave about the place. Aside from the fish there are two shipwrecks which were intentionally sunk not long ago, so they don’t have much life on them, yet.

Perhaps the highlight of the trip were the dives spent in a cavern that had shafts of light pouring in from holes in the “ceiling”.

The boat itself was more than large enough (120′ long with 10 passenger cabins), quite spacious overall, had good food and plenty of room in the dive areas which helped make things very comfortable and easy to like. 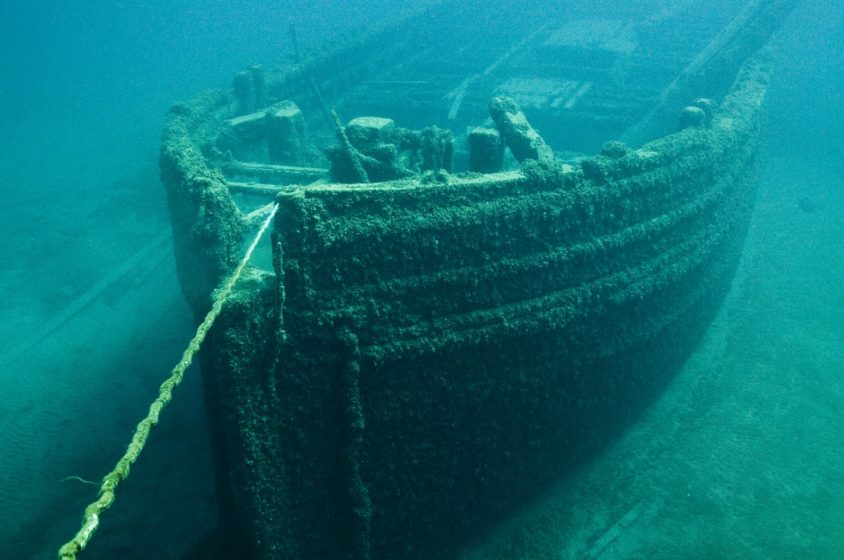 Here is a list of all the things Florida has to offer. No wait, that would take too long. It might take vastly less space to mention what Florida doesn’t have: volcanoes, mountains, and senior citizens that can drive well. That’s about it. Particularly for divers, Florida seems to have just about everything: caves, wrecks, reefs, and all in abundance.

Even if you’ve never cave dived, and aren’t cave certified, you can still get into a “cave” in Ginnie Springs which is one of the most famous cave diving locations in the world. If you do happen to be cave trained then you likely already know all about northern Florida, no matter where on the globe you call home.

Off the coast there are plenty of wrecks to dive, and more by the day. An active artificial reef program seems to drop a wreck frequently, giving divers more places to play and fish more places to call home, which attracts even more divers. Having had only a precious few days to dive the area I’ve only seen three wrecks (Duane, Bibb and Eagle) but by the accounts of those who have done vastly more diving there than I ever will, they are among the best the state has to offer. 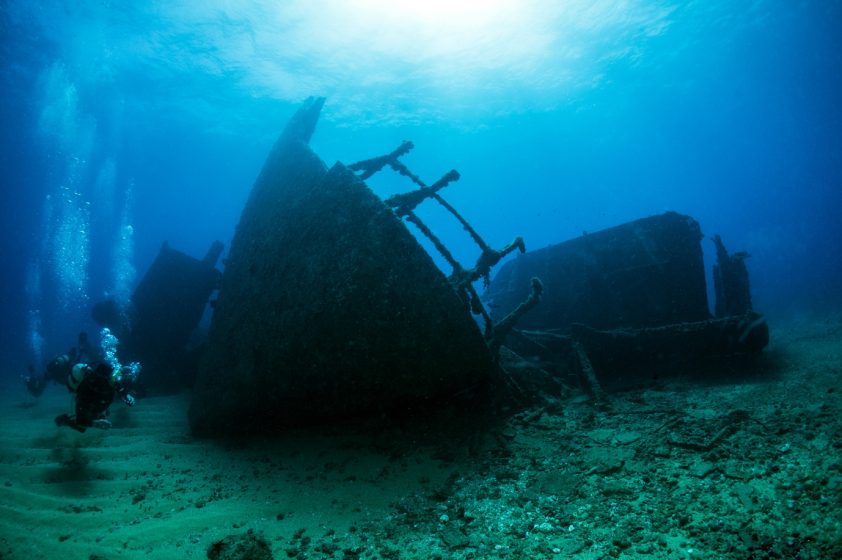 She may not be the prettiest, but there is a good chance the Sweepstakes is one of the most dived upon wrecks in Ontario. Resting in only 15 feet of water it is the ultimate entry-level wreck, making it perfect for dive students or those newly certified. Being so shallow you get lengthy bottom time to explore, the only problem being the limited amount TO explore.

The “Sweeps” is an old ship, built in 1867 and sunk in 1885 just half a stones throw away from the City of Grand Rapids which actually protrudes considerably from the water in Big Tub Harbor.

Starting from the stern the deck is as bare as a ballroom floor (with a few boards missing) aside from the entrances to the hold until you reach the bow area where the sizeable windlass emerges as the wreck’s dominant feature.

With the reduction of the water level in Lake Huron the Sweepstakes at times breaks the surface, so while diving under ice in Feb. 2001 there was not much room to roam when swimming above the deck.

Realizing the entrances to the hold are large and inviting, the Fathom Five National Marine Park officials have opted for safety and put up fencing to prevent penetration – think of it as diving’s version of safe sex. It also reduces the damage caused by exhaled bubbles which can be considerable when you take into account the volume of divers this wreck sees.

To ensure this resource is around for years to come divers have been reinforcing the sides for decades in an attempt to keep the hull together. Let’s have a standing ovation for that kinda thoughtfulness!!!